ACCIONA has started the turnkey construction of the Kathu solar complex for $540 million in the Northern Cape region of South Africa.

The consortium that is developing the EPC project is formed by ACCIONA and SENER, and began construction work in May 2016. The total amount of the work exceeds 5$40.

Located in the town of Kathu in the province of Northern Cape in South Africa, this project is part of the national energy plan IRP 2010 (Integrated Resource Program), which contemplates an increase in the country's generation capacity to 86.8 GW in 2030, of which 24% would be renewable. It is noteworthy that South Africa receives an average radiation of more than 2,500 hours of sunshine a year and the average daily rate is between 4.5 and 6.5 kWh / m2, so that solar energy is one of the main pillars in The country's future energy supply system.

ACCIONA carries out the management of engineering, purchases, construction, and start-up of the plant until its turnkey delivery. The 100 MW power plant uses the so-called Concentrated Solar Power (CSP) technology with parabolic trough collectors and molten salt storage. It will be able to supply electricity to 80,000 households once operational.

Currently, the consortium builder has begun the construction work, once developed the basic engineering required. The project has a strong commitment to the local community and will use suppliers from the local area. The facility is expected to commence commercial operation in 2018.

For both companies, this is the second solar thermal project to be jointly undertaken in South Africa, following the recently inaugurated 50 MW Bokpoort (Upington) plant, which is also part of the consortium. 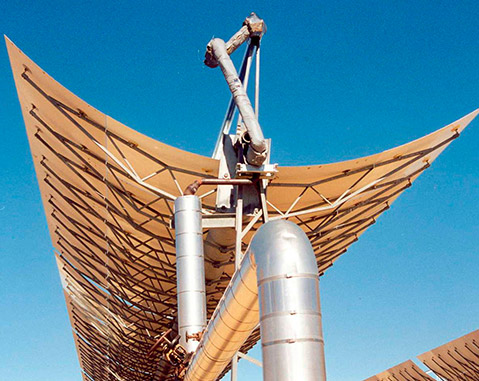 It is estimated that an energy project utilizing concentrating solar power technology deployed over an area of approximately 100 x 100 miles in the Southwest U.S. could produce enough power for the entire U.S. annually.

The construction of the 160-MW solar thermal power plant in Ouarzazate Province is the largest contract secured by a Spanish company in Morocco. The project is currently under construction and will come into operation in the second half of 2015.