This is the world's first offshore gas terminal; more than 800 people took part in the construction of the caisson, which had a total budget of more than €200 million.

The terminal consists of a prestressed concrete chamber (GBS) measuring 180 m long, 88 m wide and 47 m high. It contains 2 gas storage tanks with a capacity of 125,000 m3 each, and a distribution capacity of 8 million metric tonnes annually. The entire concrete structure is fortified with reinforced and prestressed steel. Electromechanical installations were also required for the structure of the LNG terminal.

The crossing from Algeciras to the final destination in the Adriatic Sea, towed by tugboats, took 21 days. It sailed along the North-African coast and went around Palermo and Italy’s “boot”.

The huge structure is like an artificial island, and is designed to withstand different environmental conditions including high winds, waves and earthquakes at its final destination, 17 km off the Venetian coast. ACCIONA Infrastructures was awarded the Safety and Prevention of Occupational Risks Prize from by Aker Solutions for the project.

The structure of the GBS caisson rests on a base slab over which 12.5-m high cell walls slide over an area of 15,840 m2. Above these cells, the tank’s supporting slab was built in order to slide the 33-m high upper enclosure walls again and close the upper slab (called the "topside"), where the gas processing plant was installed. The tanks, with capacity of up to 250,000 m3, were placed inside the caisson.

The main method used for the civil works was the construction of more than 220,000 m2 of walls made up of sliding formwork, along with the installation of 56,000 linear metres of piping (pumping systems, heating systems, etc.), and more than 8,500 units of steel components embedded in the concrete to enable the fastening of the protective wall liner.

To close the upper slab, 40 prefabricated girders weighing 220 tonnes and measuring 35 m in length were installed in order to enclose a framework of steel girders and concrete slab in between them.

The deadline to deliver the caisson, in order to allow access to the tank subcontractor, was 79 weeks.

The infrastructure and service works for Aker Kvaerner Contracting, called "Site Operations", comprised 3,500 m2 of offices, parking for 600 cars, a canteen for 400 men, installation of five power substations with a capacity of 6,300 kW, drainage of the dry dock and supply of running water, as well as all the services required by the rest of the client’s subcontractors. The duration of the project was 140 weeks in total. 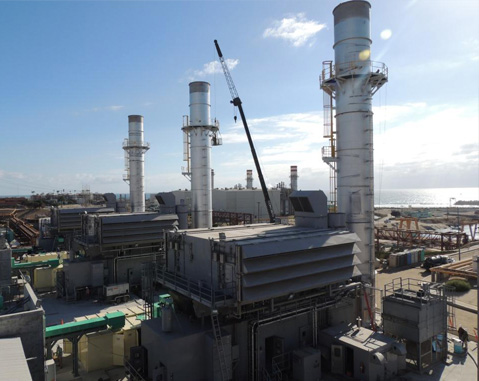 This plant will cover peak and emergency demands in Baja California, and is the first of this kind of technology in the state. 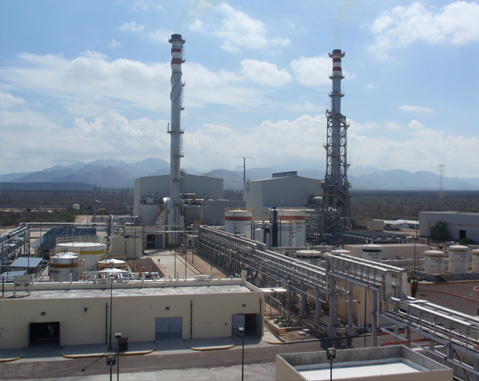 ACCIONA carried out the design, supply, construction and start-up of a 42-MW power generation plant.