ACCIONA in the United States

ACCIONA in the United States

ACCIONA in the U.S.

Responding to the challenges facing our planet

UNITED STATES, ONE OF THE COUNTRIES GLOBAL WARMING MOST AFFECTS

The US is the fourth largest country in the world and this means it’s host to an enormous wealth of ecosystems and variety of climate conditions. The other side of the coin is that the runaway climate crisis is responsible for the collection of problems it faces across its territory. The latest National Climate Assessment commissioned by Congress shows that the US is getting warmer faster than the global average.

Now the Paris Agreement mainly aims to limit global warming to 1.5°C, without in any scenario exceeding 2°C, so the US needs to progress inexorably toward carbon neutrality by 2050. To do this, the country will have to be reducing its emissions by 6% every year from now on, a gigantic task when we consider it has only cut its emissions by 12% over the past two decades. So, the national challenge is to reach “net zero” through a drastic transformation toward renewable energies without delay and decoupling from fossil fuels.

FROM THE CLIMATE CRISIS TO THE WATER CRISIS

The consequences of the climate crisis are obvious in the US in many ways: loss of biodiversity, spread of invasive species, extreme events such as typhoons, floods, waves of ice-cold, and more phenomena which, according to the NCA report, are now happening every three weeks.

But one of the most overwhelming problems in many US regions is also the water crisis. Droughts are increasingly common now due to global warming, especially in the south-east of the country. We’re warned about the dangers hanging over aquifers – which are increasingly over-exploited due to droughts - as well as food insecurity due to the lack of water to keep up with farm output.

And then there is intense rainfall and flooding which cause the sea level to rise. Saltwater enters the aquifers, polluting potable water sources and endangering safe supply.

ACCIONA IN THE US, AN ALLY FOR DECARBONIZATION

ACCIONA is leader in the development and management of infrastructure, water, services, and renewable energies. A member of Spain’s top-line IBEX35 index  (ANA.MC), we are a listed company with over 40,000 employees in more than 60 countries on five continents.

In North America, ACCIONA Energía operates more than 1 GW of wind power, solar thermal and industrial-scale energy storage projects, which make it one of the main players in the US energy transition. The company is the world’s biggest utility without a fossil fuel legacy. It benefits from over 30 years of track record in the sector and also boasts one of the most experienced personnel on the planet.

ACCIONA’s team in the US is involved in all aspects of renewable energies, including the financing, construction and operational development of projects, as well as energy marketing.

ACCIONA is actively seeking opportunities to construct a more sustainable future and increase the company’s presence in the US.

ACCIONA in the US has successfully overcome important infrastructure challenges since 2003. Our leadership and experience covers the whole value chain, from research and development to the construction, operation and maintenance of projects.

ACCIONA Energía owns and operates 10 wind farms in the US, which together provide over 1 GW of wind power capacity, as well as the Nevada Solar One 64 MW concentrated solar power plant. The company also has a portfolio of four solar plants under construction, which will increase its solar and wind power production capacity to more than 2 GW. Also, ACCIONA Energía has acquired the Cunningham Battery Energy Storage System (BESS), the biggest such plant in the state of Texas, which will start operating in the first quarter of this year (2023).

In the water sector, ACCIONA has built and operates the Tampa Bay desalination plant in Florida, again the biggest such plant in the US, which supplies water to a total of 2.5 million people, producing 108,000 cubic meters of water per day. The facility began operating in 2008 and has received several international awards from the sector.

OUR EXPERIENCE IN NUMBERS 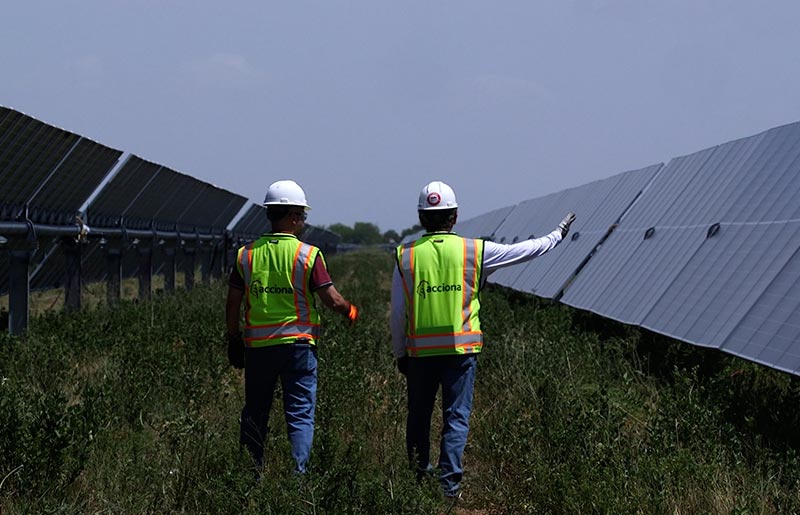 FOR A CLEANER FUTURE

Globally, ACCIONA is leading the corporate fight to mitigate the harmful effects of the climate emergency and accelerate the shift to a decarbonized energy model. ACCIONA Energy is the world's largest fossil-free utility operating exclusively in renewable technologies, with more than 30 years of experience in its sector. 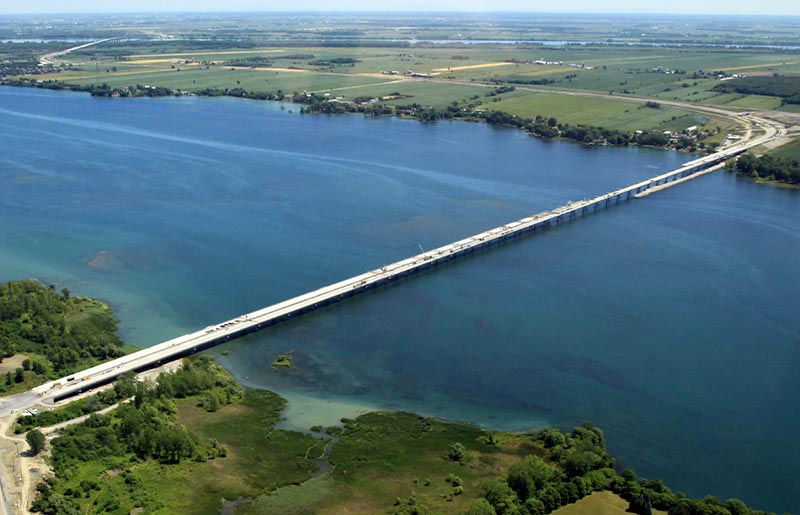 ACCIONA has more than 100 years of experience building major transport projects. To date, the group has participated in the design and execution of more than 10,000 kilometres of transportation infrastructure, including roads, bridges, tunnels and railways, including some of the most significant underground projects in the world. 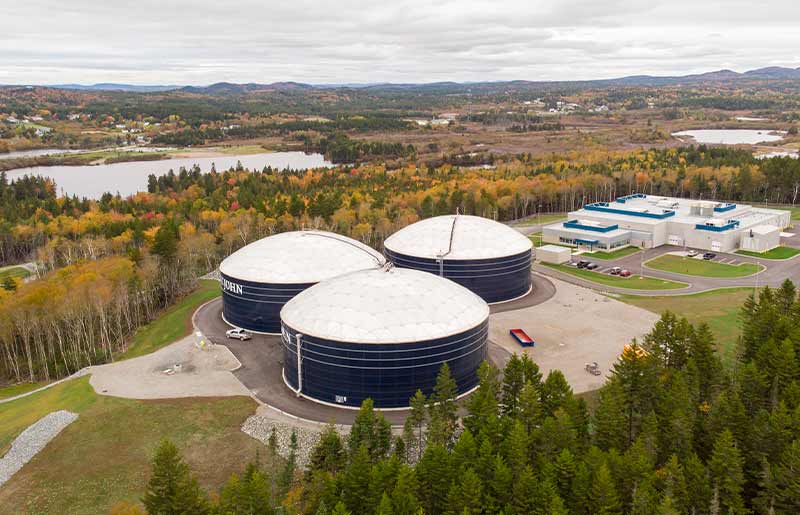 Water scarcity currently affects 40% of the world’s population, and this number is only increasing with global warming. ACCIONA designs, builds and operates safe clean drinking water treatment plants, tertiary treatments for reuse, and reverse osmosis desalination plants to strive for universal access to this essential resource. 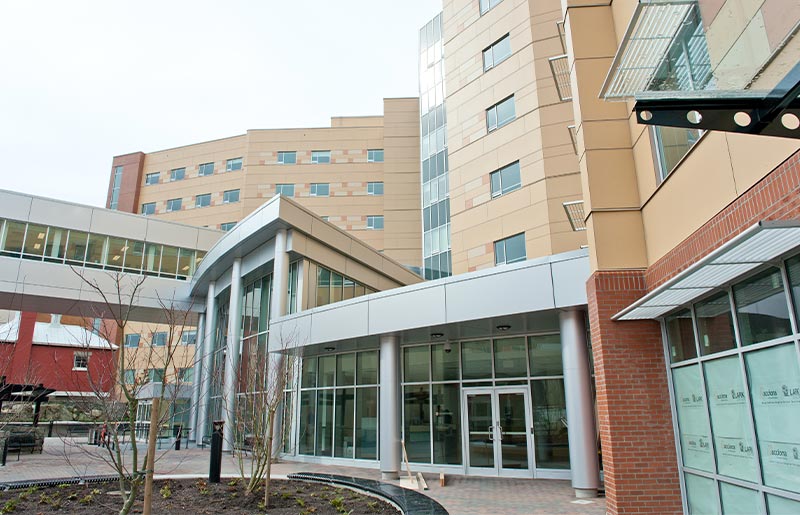 ACCIONA provides fundamental social infrastructure services that facilitate public welfare improve quality of life. Supported by highly qualified professionals and its own vocation for innovation, ACCIONA carries out its activities in line with the United Nations’ Sustainable Development Goals.

HIGHLIGHT PROJECTS OVER THE YEARS

see all our Projects

Read the latest news about ACCIONA

ACCIONA Energía has signed an agreement with Qcells, a subsidiary of the South Korean industrial ...

ACCIONA Energía continues dynamic growth in the US

The company is on track to double its installed capacity to more than 2,600...

Read the latest news about ACCIONA

our commitment with local communities

As part of our Social Impact Management (SIM) program, ACCIONA Energia invests in the communities where we operate.  Each year we support nearly 20 non-profit organizations providing services in the areas of education, wellness and environmental stewardship.

Our employees are also an integral part of their communities.  They serve as members of city councils, school boards, fire departments, civic organizations and coach youth sports.

Additionally, our projects provide extra income to farmers, ranchers and other private landowners.  These payments provide our lease holders with an income stream that is both consistent and drought-proof.

We invests in the communities where we operate

Our commitment with people, an acknowledged value

If you want to make a positive impact on your surroundings and make the planet a better place, join the movement for change

Know more about the company's activity, performance and strategy

Our Integrated Report 2021 sets out our results and also gives information about our strategy, governance as well as the risks and opportunities we have faced and overcome.

The report contains our proposal to provide innovative development solutions, adapting to the imminent wave of change, based on the company's vision and regenerative purpose, while striving to lead the sustainable transformation.

This website is not compatible with
INTERNET EXPLORER 11 or earlier versions.